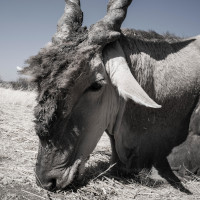 When and where were you born?
10 March 1985 in Windhoek, Namibia

How did you get into hunting – what was it that influenced you?
I was raised on a cattle ranch in central Namibia where hunting was part of growing up.

Drikus is a PH with Ekuja Hunting Safaris

With whom did you train, apprentice and learn from?
When I was in primary school, our cattle ranch was converted into a game ranch where various well-known professional hunters came to hunt on the ranch. Throughout my school career I made use of every opportunity to accompany these hunts and built up a vast amount of experience.

What was the most important thing you learned during those early years?
To be patient and always treat all the clients the same, whether it’s an elephant hunt or a normal plains game safari.

Any specific client experiences that stood out?
My first years of professional hunting were hunting plains game in central Namibia.
I had a Spanish-speaking client who tried to explain something to me for 30 minutes and I didn’t understand a word. All of a sudden, he started shouting and stopped the Land Cruiser. He jumped off and took a dump right next to the vehicle. Only then I realized what he was trying to explain the whole time.
As a professional hunter, each client brings a special experience with him. Whether it’s the excitement of hunting Africa for the first time or a collector getting that specific species that he’s after.

Anything you learned about what not to do?
Always try to avoid talking politics in the hunting camp.

Which countries/areas have you hunted since then?
Namibia, South Africa, Botswana and Zambia.

If you could return to any time or place in Africa, where would it be?
To the time where politics and uninformed keyboard warriors didn’t have a say in the hunting industry.

Which is your favourite trophy animal to hunt? And why?
Elephant. There’s nothing more thrilling than getting in the personal space of a big old elephant bull.

Tell us about two of your most memorable hunts.
Hunting my first 60-plus inch Kudu bull with a client in the first few years of my hunting career. In later years, taking two extraordinary elephants just a few days apart on a 21-day safari.

What are your recommendations on guns, ammo, or equipment for the first-time hunter to Africa?
Make sure that whatever gun you shoot, you are comfortable with and not afraid of the recoil. Always practice off shooting sticks.

Which guns and ammo are you using to back-up on dangerous or wounded game and tell us why?
500 Nitro-express as it has awesome stopping power.

How has the hunting industry changed in your opinion over the past number of years?
Social media and the internet have given people the right to have an opinion on Africa and how the hunting industry should be managed. Most of these people are true keyboard warriors and should not even had an opinion as they are ill informed and have no idea on what’s going on in Africa.

If you should suggest one thing to your hunting clients to improve their safari experience, with you, or with anyone else for that matter, what would it be?
Take time and effort to complete your questionnaire in as much detail as possible as a lot of hunting camps are remote.

What can the industry do to contribute to the long-term conservation of Africa’s wildlife?
Any animal must always have a value. The more valuable a specific species is, the longer it would be preserved.

What would be your ideal safari if you have one last safari?
Hunting all of the Big 5 with one client on one safari in what is left of wild Africa.